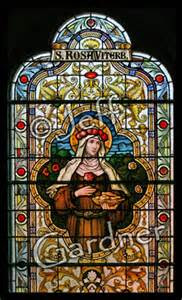 Rose achieved sainthood in only 18 years of life. Even as a child Rose had a great desire to pray and to aid the poor. While still very young, she began a life of penance in her parents’ house. She was as generous to the poor as she was strict with herself. At the age of 10 she became a Secular Franciscan and soon began preaching in the streets about sin and the sufferings of Jesus.
Viterbo, her native city, was then in revolt against the pope. When Rose took the pope’s side against the emperor, she and her family were exiled from the city. When the pope’s side won in Viterbo, Rose was allowed to return. Her attempt at age 15 to found a religious community failed, and she returned to a life of prayer and penance in her father’s home, where she died in 1251. Rose was canonized in 1457.

The list of Franciscan saints seems to have quite a few men and women who accomplished nothing very extraordinary. Rose is one of them. She did not influence popes and kings, did not multiply bread for the hungry and never established the religious order of her dreams. But she made a place in her life for God’s grace, and like St. Francis before her, saw death as the gateway to new life.

Rose's dying words to her parents were: "I die with joy, for I desire to be united to my God. Live so as not to fear death. For those who live well in the world, death is not frightening, but sweet and precious." 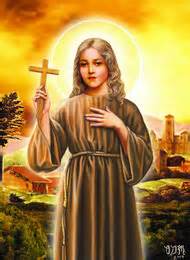