Where in the Bible does it state that Mary, mother of Jesus is sinnless?

Where in the Bible does it say that Mary, mother of Jesus, is sinless? And if it is not in the Bible, why does the Catholic Church act like she is? 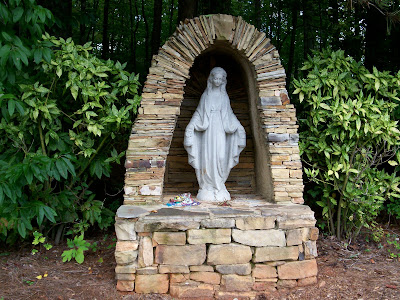 Catholics differ from some Christian Churches which accept the Scripture as the only source of God’s revelation. Catholics have a strong belief in the truth of Scripture, but we also believe in tradition as a way in which God continues to reveal truth to us. Tradition can include beliefs, customs, prayers, and worship, the teaching of popes, bishops, theologians and Church councils. It’s our process of continually reflecting on the way in which the Word of God encounters our own experience as a community of faith.

The belief that Mary lived without sin from the moment of her conception springs from Church tradition. It evolved over a period of time, and was not formally defined as a teaching of the Church until 1854. It is not found explicitly in Scripture, but seems for Catholics to flow naturally from the testimony of Scripture that Mary was “full of grace” (Luke 1:28) and “blessed” (Luke 1:42).

In Catholic understanding the belief in Mary’s “immaculate conception” does not say so much about Mary as it is about Christ’s saving power. We believe that God created the human person to be in God’s own image. Grace is more original than sin. Our natural state was to be “full of grace.” Sin is our universal experience but it’s not what God intended for us in the past nor wants for us in the future. We are saved from sin through Christ. Mary’s being conceived without sin takes place in the context of the entire saving act of Christ. In being “full of grace” she is a model of what we human beings were intended to be and who we are redeemed to be through God’s saving power. She is the first sign of God’s victory over sin in Christ.

You also ask: “Why are Catholics who are baptized when they were infants, choose to lead unholy, even atheistic lives, die and then the priest at the funeral says they are going to heaven because they were baptized?”

The bishop of Rome, as head of the Catholic Church, sometimes declares certain people to be “saints” because they lived such exemplary and holy lives that we can believe with confidence that they are “with God in heaven.” Such a declaration only comes after a long investigation into the facts of that person’s life. The Catholic Church has never declared any deceased person to be “in hell.” Aside from this we don’t know and can’t presume the eternal state of any person who has died, although we believe that God desires all people to be with him in death as well as in life. Baptism does not automatically ensure that a person will go to heaven when he or she dies. We must try to live out our Baptism with lives of faith, hope and love.

The Catholic Church asks its members to pray for those who have died BECAUSE we know that we are all sinners, and even when we have tried to live a good life we can die short of the purity of heart that makes eternal life “with God” a reality. Yet we believe that God’s mercy is not thwarted by death and that God has the power to purify and transform the soul even after death so that it is fully open to participating in eternal life. Purgatory is not a place of “sentences”, like a prison, because it exists in eternity which is timeless.

We should certainly pray for the living as well, that they may accept God’s grace into their lives.


Many people, Catholics included, wrongly believe that this dogma refers to the conception of Jesus Christ. But, in fact, the Immaculate Conception doctrine states that Mary, "in the first instance of her conception, by a singular privilege and grace granted by God, in view of the merits of Jesus Christ, the Saviour of the human race, was preserved exempt from all stain of original sin." This meant that Mary herself was preserved from original sin, that she was born without a sin nature, and that she lived a sinless life.
There is no biblical support or scriptural basis for the Immaculate Conception of Mary doctrine. Mary, although favored of God, was an ordinary human being. According to Scripture, only Jesus Christ was immaculately conceived, born of a virgin, and born without sin. He was the only human being to live a sinless life.
Why do Catholics believe in the Immaculate Conception?
Simply put, Catholic teaching purports that in order for Jesus to have been born without sin, he would have to have been conceived within a sinless vessel. Catholics believe that if Mary had a sin nature when she conceived Jesus, then he would inherit this sin nature through her.
Arguments: For this doctrine to hold up, wouldn't Mary's mother have to be free from original sin also, else Mary would have inherited a sinful nature through her? Based on Scripture, the miracle of Jesus Christ's conception was that he alone was conceived as the only perfect and sinless one, because of his complete union with the divine nature of God.
The Assumption of Mary
The Assumption of Mary is a Roman Catholic doctrine, and to a lesser degree it is also taught by the Eastern Orthodox Church. Pope Pius XII proclaimed this doctrine on November 1, 1950 in his Munificentissimus Deus. This dogma states that the "Immaculate Virgin," the mother of Jesus, "after the completion of her earthly life was assumed body and soul into the glory of Heaven." This means that after her death, Mary was resurrected and taken up into heaven, body and soul. The doctrine further states that Mary was glorified in heaven and is "exalted by the Lord as Queen over all things."


There is no biblical support or scriptural basis for the Assumption of Mary doctrine. In fact, the Bible does not even record Mary's death.
More Misconceptions About Mary
Catholic Popes have referred to Mary as "co-redemptrix," "the gate of heaven," "Advocate," and "Mediatrix," ascribing to her a cooperative role in the work of salvation. It should be noted that the official Catholic stance is that Mary's elevated status "neither takes away from nor adds anything to the dignity and efficaciousness of Christ the one Mediator."