Martyrdom of John the Baptist


The drunken oath of a king with a shallow sense of honor, a seductive dance and the hateful heart of a queen combined to bring about the martyrdom of John the Baptist. The greatest of prophets suffered the fate of so many Old Testament prophets before him: rejection and martyrdom. The “voice crying in the desert” did not hesitate to accuse the guilty, did not hesitate to speak the truth. But why? What possesses a man that he would give up his very life?
This great religious reformer was sent by God to prepare the people for the Messiah. His vocation was one of selfless giving. The only power that he claimed was the Spirit of Yahweh. “I am baptizing you with water, for repentance, but the one who is coming after me is mightier than I. I am not worthy to carry his sandals. He will baptize you with the Holy Spirit and fire” (Matthew 3:11). Scripture tells us that many people followed John looking to him for hope, perhaps in anticipation of some great messianic power. John never allowed himself the false honor of receiving these people for his own glory. He knew his calling was one of preparation. When the time came, he led his disciples to Jesus: “The next day John was there again with two of his disciples, and as he watched Jesus walk by, he said, ‘Behold, the Lamb of God.’ The two disciples heard what he said and followed Jesus” (John 1:35-37). It is John the Baptist who has pointed the way to Christ. John’s life and death were a giving over of self for God and other people. His simple style of life was one of complete detachment from earthly possessions. His heart was centered on God and the call that he heard from the Spirit of God speaking to his heart. Confident of God’s grace, he had the courage to speak words of condemnation or repentance, of salvation. 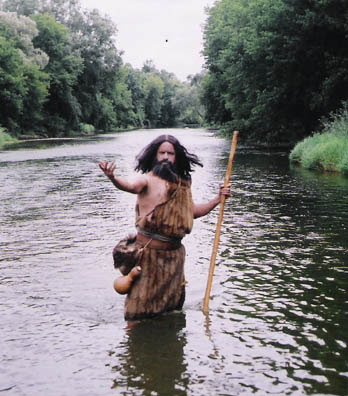 “So they came to John and said to him, ‘Rabbi, the one who was with you across the Jordan, to whom you testified, here he is baptizing and everyone is coming to him.’ John answered and said, ‘No one can receive anything except what has been given him from heaven. You yourselves can testify that I said [that] I am not the Messiah, but that I was sent before him. The one who has the bride is the bridegroom; the best man, who stands and listens for him, rejoices greatly at the bridegroom’s voice. So this joy of mine has been made complete. He must increase; I must decrease’” (John 3:26–30).