Matthew was a Jew who worked for the occupying Roman forces, collecting taxes from other Jews. The Romans were not scrupulous about what the "tax farmers" got for themselves. Hence the latter, known as "publicans," were generally hated as traitors by their fellow Jews. The Pharisees lumped them with "sinners" (see Matthew 9:11-13). So it was shocking to them to hear Jesus call such a man to be one of his intimate followers.
Matthew got Jesus in further trouble by having a sort of going-away party at his house. The Gospel tells us that "many" tax collectors and "those known as sinners" came to the dinner. The Pharisees were still more badly shocked. What business did the supposedly great teacher have associating with such immoral people? Jesus' answer was, "Those who are well do not need a physician, but the sick do. Go and learn the meaning of the words, 'I desire mercy, not sacrifice.' I did not come to call the righteous but sinners" (Matthew 9:12b-13). Jesus is not setting aside ritual and worship; he is saying that loving others is even more important.

No other particular incidents about Matthew are found in the New Testament. 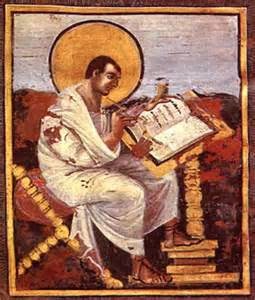 
We imagine Matthew, after the terrible events surrounding the death of Jesus, going to the mountain to which the risen Lord had summoned them. “When they saw him, they worshiped, but they doubted. Then Jesus approached and said to them [we think of him looking at each one in turn, Matthew listening and excited with the rest], ‘All power in heaven and on earth has been given to me. Go, therefore, and make disciples of all nations, baptizing them in the name of the Father, and of the Son, and of the holy Spirit, teaching them to observe all that I have commanded you. And behold, I am with you always, until the end of the age’ ” (Matthew 28:17–20).
Matthew would never forget that day. He proclaimed the Good News by his life and by his word. Our faith rests upon his witness and that of his fellow apostles.

From such an unlikely situation, Jesus chose one of the foundations of the Church, a man others, judging from his job, thought was not holy enough for the position. But he was honest enough to admit that he was one of the sinners Jesus came to call. He was open enough to recognize truth when he saw him. "And he got up and followed him" (Matthew 9:9b). 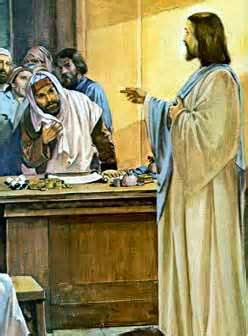