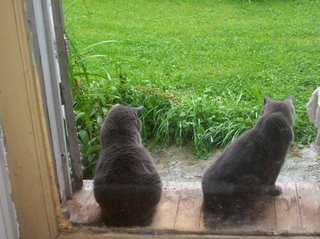 Yesterday, my computer started acting goofy; e-mail was not being sent with usual cyber-speed, I kept getting signed off and logging on repeatedly, and most functions were slowed down to a crawl. The computer's a bit dated, having only 12.63 Gigs, and my musical files taking up 98 percent of its capacity, I figured that I had too much stuff jammed into the poor thing, so I started deleting some music files, but the situation worsened. I went into the control panel, and did a disk cleanup, but things did not change. I logged off from everything, and ran a virus sweep, even though I had just run one earlier in the week, but alas, no cigar. I ran a disk defragmanet analysis, but was informed that it was not imperitave to run that. I re-booted the modem, and the computer several times, meanwhile, my blood pressure stepped up a bit. I prayed over it, but got cut off all together. My side toolbar was giving the weather in Honolulu, then Hong Kong, and I knew something was really wrong! Finally, I dug out my Verizon-Yahoo files from the notes I filed when I signed up for DSL, and found the telephone number for tech support, and called. I was put through all the automated paces, and then on hold waiting for a real human being to walk me through the calamity. I was informed that due to high volume of calls in at the time, to call back later. Stubbornly, I kept calling, talking to the automated voices, and waiting, and getting hung up on. Eventually, I got through to a real voice. I asked him how the weather was in India, but he did not make any small talk with me. I followed his walk-through instructions, and only then did he inform me that Yahoo was having trouble with the system! Why didn't he tell me in the first place? I turned off the computer, and picked up a book, and tried to relax. Each hour, I tried to get on line, but with no luck. Finally, I went to bed. This morning, all systems were fixed, and no more weather reports from Honolulu, or Hong Kong. Instead, I was greeted by the current news headlines:
Israeli jets targeting Hezbollah strongholds, Palestinians fire rockets at Israel, 33 killed in suicide bomb attacks, Fla. family die in murder suicide, 33 killed in Iraq by suicide bombers,US military urged abuse in Iraq, and Episcopal Bishop in Ark. OK's gay blessings.
Thank you, Yahoo for separating me yesterday from all the terrible news sweeping our world. Thank you for the e-mails I did not receive from friends who let me down this week, and thanks for the good nights sleep I got from the ignorance of the tragedies.
Posted by buckybob at 7:11 AM