The Life and Times of Herbie 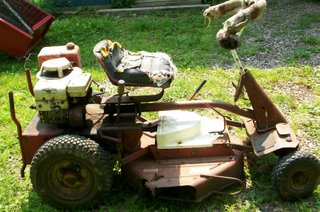 The Life and Times of "Herbie"

Ahh......Herbie; Where do I start? Well, Herbie is a Snapper riding lawn mower from the late sixties-early 70's. No one remembers anymore; we're all too old! And as I talk about him, the legend continues to roll and build!
Why write about a stupid lawn-mower? As an American, I've been programmed to believe that the lawn must be mowed each week during the growing season. My brother-in-law bought a new house in 1967, and soon afterward, the lawn-mower from the "farm" musta gave out, and Herbie came on the scene. My sister's kids were young, then, and affectionately named the new lawn-mower " Herbie".
Herbie's main task was to mow the nice, new, flat, suburban, grub-free, fertilized green lawn at the new house in the Rochester, NY suburban neighborhood in Penfield, NY. No big deal for a new lawn-mower.
Well, Herbie continued to mow the lawn in Penfield, for the next 28 years! I was living with my sister and bro-in-law at the time. When the time came for me to move on, Herbie was a token parting gift from my brother-in-law, to aid my re-location to an old farm-house in Palmyra, NY, where Herbie and I moved in. The house was in what I'll call "whats left of the country in upstate New :York". My landlady's property came with about 8 acres of land, but her lawn is probably way over and acre. We can break it down into about four separate lawns.
When I moved in,. most of the four lawns hadn't been mowed in time out of reckoning. The first section I picked to mow, the weeds stood about chest level to me. Sitiing on the seat of Herbie, it was about eye level. Starting out in 2nd gear, (1st was useless in those tall weeds!) I moved ahead, the mowing deck as high as it would go. Inch ahead, till the mowing deck was overwhelmed, and put the clutch in, stop, let the engine pick up RPM's, maybe back up, and get fresh start, and plunge ahead at a crawl. I really couldn't believe I was actually plowing through this stuff!
Things went OK till I plunged into "something", under all the over-growth. Something, turned out to be a pile of telephone poles, laying on the "lawn". When I hit the poles, poor Herbie stalled out. I climbed off, and pulled him back from the weeks for inspection. One edge of the mowing deck had bent, and broke away leaving jagged metal protruding out. I lifted the front end up, and stood Herbie on his end. The brake assembley was a twisted convoluted mess. I cut the cable, and pulled the brake shoes off the axle, and from then on, Herbie was "brakeless". I straightened out the twisted, rusty shards on the side of the mowing deck, and pulled the starter rope. Herbie sprang into action, in a blue cloud of smoke! Re-engaging the blade, I continued mowing.
He continued running, with many break-downs, but refused to stop. this has been going on for seven years. At the present time, Herbie's sporten a new disc drive plate, a new V belt for the mowing deck, and a new shear pin in the right rear axle hub.
All I've got to say is Snapper made one heck of a machine back then!!!
Posted by buckybob at 5:51 PM