Volkswagen Car for the People 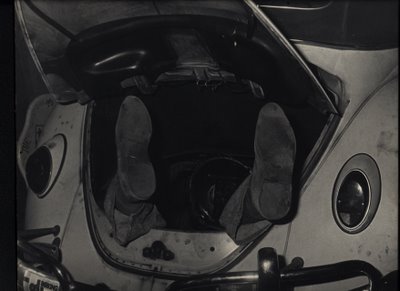 Ahh, the Volkswagen! Car for the people; it was my first car, a 1961, faded red, upstate New York rust, no heat to speak of, dim 6 volt headlights, fun beyond my teenage imagination! First conception was in 1932, by Ferdinand Porsche, the dad of VW. Actual production began in 1945, and a whopping 1,785 "beetles" were built. In 49, the same year the convertible model was introduced, two VW's were sold in the USA! They were very simplistic cars, not even having Hydraulic brakes until 1950. I still have today, Chilton's Repair & Tune-Up Guide, covering ALL TYPES AND MODELS from 1949-1968. Mostly, I relied on a book called "How to keep your Volkswagen alive, or The Complete Idiot's Manual" I wish I still had that one. It was written by a laid-back hippie in Calif. and got me from emergencey side of the road repairs, to complete engine overhaul. This guy assumed you did not know left from right, and took you from there, in a witty, understandable, calming persona. The above photo, shows my favorite of all my VW's, a 67 convertible. No, the feet sticking out of the engine compartment was no joke; I was replacing the Transaxle. I could write a book about my travels and adventures in that baby! They say those babies would float, but of course that would be assuming the floorpan was not rusted, and all the door seals were still in place, which I certainly could not attest to! But it was forgiving, peppy, cheap to run, easy to fix, and best of all MAXIMUM FUN TO DRIVE!!! Even pedal to the metal (I was young!) jack-rabbit starts, and pushing it into the curves, it got way over 30 MPG on its worst day, but who kept that close a track with gas being less than 30 cents @ gal. With the back seat folded down, the stowage capacity was deceiving, but with the top down on the way to Virginia Beach, the radio cranked, kids in back, cooler in trunk, we did the weekly pilgrimage to the ocean in style! When a freak snowstorm hit Virginia Beach, dumping 18 inches in 6 hours, my VW was one of the very few navigating the roads with its light imprint and rear-engine traction. And ya had to love the horn! As long as you kept a check on the oil, and fanbelt tension, changed the points (or filed them in a pinch) you were good to go till the cows came home. All in all, I ended up owning two "Beetles" and a Camper with screened in, curtained windows, AC/DC fridge, bed, closets, and yes, even the kitchen sink!

Ahh, memories of a bygone generation.
Posted by buckybob at 7:44 AM