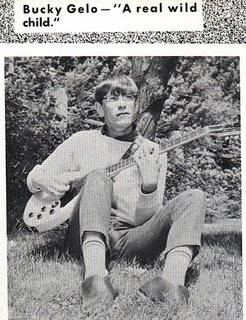 I found the 66 Yearbook from Wayne Central High, in Ontario NY, where I grew up. This was my senior photo, taken the summer of 1965. I think it was the best time of my entire life. See the photo caption? "A real wild child"

What that meant, was I played guitar, had a band, wore my sweatshirt inside-out on occasion, two different colored sox (Mostly from dressing for school in the dark wintry morns) and was more inclined to set the trend, rather than follow it. Of course, back then, if you sang "Louie Louie", you were under immediate suspicion, anyway. "A Real Wild Child"

Youd'a thought I was a trouble maker, if one was to mark my "visits" to the principal's office! In fact, I've never even been in a fight in my life. I never stole or vandalized anyone's stuff. Maybe my open smile gave way to that Eddie Haskel aura, only I really meant it! Luckily, between the school nurse living across the street, and giving guitar lessons to the gym teacher's son, I managed to keep my teenage head above the proverbial drink, though there were a fair amount of "threats" of expulsion.

The summer of 65, I managed to have a few bucks in my pockets, from guitar lessons, I didn't have a car yet, or any expenses, no real responsibilities, two long legs to carry me, a beautiful girlfriend (or two) and the living was easy. Louis Armsrtong had knocked the Beatles off the Billboard no 1 place for a couple weeks with "Hello Dolly", but I was inhaling the Beatles, and could care less about Satchmo (at the time).

My sister had a little basket shop, complete with a Coke machine outside. It served short cold little bottles of Coke, Tab, and Fressca for a dime. The ole Coke machine was the normal meeting place and jump-off point for my other "wild" friends. None of us legally "drove", but growing up in the country, we all had a vehicle or two at our disposal. We had a 1948 Oliver tractor, but my first choice of cool, was a 1953 Ford Pickup, with the doors removed, every nano-inch of the body telling a story of my early driving escapades, and the affectionate name of "The Beetle" (This had nothing to do with the band, The Beatles)

When I think back on how our parents gave us kids a pretty wide berth, I guess I have to realize how simpler things were back then. We left our ignition keys in all the vehicles, hitchhiking, was fairly common place, though we spent many a late night, walking down Lake Rd. From a dance at Sodus Point Beach House, with no cars coming by at all. A few of those walking sessions and there wasn't anything that my buddy Tom & I didn't know bout each other.

I was picking up guitar pretty quickly, and taught Tom as I learned along. It wasn't too long, and we were playing parties, school dances, and the legend Hall. We both plugged out guitars into an old "hand-me down" guitar amp. Later, someone donated a microphone (also plugged into the same amp) We tried out a couple drummers, and the Chillers were born. That summer of 65, we added a bass player. He couldn't play, but he sang great, and he had a car!