My first car, a 1961 VW lasted only about a year and of course, I knew little to nothing about maintainence or repairs.  I moved on to a 1965 Dodge Coronet 440.  It was in great shape, but to me, plain boring.

One day I answered a sale post for a 1957 MGA.  My friend Lonnie and I drove out to Rochester to kick the tires.  It was in pretty rough shape, but to me, beautiful.  It was a convertable, missing the entire top.  The guy let us tow it around to try to start it, but no luck.  I offered him $ 200.00 and off we went back to Ontario.

We were more than halfway home, passing through Webster, when I heard a loud bang.  Looking in my rearview mirror, Lonnie and the MG were totally engulfed in thick black smoke.  Unbeknown to me, Lonnie had put the car in 3rd or 4th gear and had the ignition key on.  I had been pulling it all the way from Rochester, to Webster with the clutch out.  In Webster, it decided to start!  The smoke cleared and Lonnie sat there with this tongue n cheek look.  After the car started, he put it in neautral and let the engine idle the rest of the way home.

It only ran on three cylenders, having a cracked head.  I got one from Andy's junkyard and the Benneway brothers changed it for me.
A guy I worked with, from England, took it home one weekend and tuned it up for me.
It was a thrill a mile!

There were many isuues to overcome, but I enjoyed the MGA until I went into the Navy. 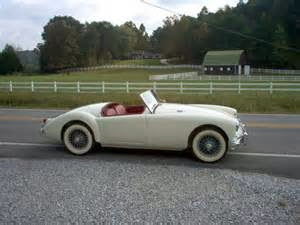 Bucky, I still have my MGA 1600. In a barn in Ontario waiting for my retirement and a restoration. Wnna play? Eric Mehserle.