I just read an article on Bill Maher, bashing Tim Tebow over blunders in a stupid football game.  I understand that if you a famous for anything in today's world, you are under the microscope for anything and everything you think, believe, or do.  That's a given.  But the below the belt bashing of someone, including bashing one's religious beliefs, is to me, an abomination for they are not only insulting that person but all those who have the same beliefs.  How can he be so bold, so audacious, so cruel to act as if their poop does not stink?
Tim Tebow, hats off to you for not even replying to the bash.  I guess this is modern day crucifying.  The persecution continues over 2,000 years later.  Oh well, we were warned of it.  I have to admit that I'd like to persecute Bill, but I have to be above this, as Tim Tebow is.  Even if I did not believe, I think I would be above bashing any one's religious beliefs.
Maher continues to bash in a debate with Bill O Reilly, stating that 60 % of Americans still believe that the Noah's Ark story is true.  well, let me say this about that:  It is very encouraging to me if 60 % of Americans believe that.  I would have guessed the percentile to be lower.  As for me, I believe every word, every punctuation mark and exclamation point in the bible.
God has patience of super-human power for not destroying our evil world centuries ago.  Personally, I believe the end is very near, for I can't conceive how much more violent or evil our society can get before Jesus makes his appearance.  I don't understand what people have against what Jesus stands for.  He only wants us to love one another, to have the capacity to forgive, and the humanity to help those in need.  We all, of course fall short of that in one way or another.  I can speak for myself whole heartily when I proclaim that.  I go to Mass daily, not because I'm so righteous, but because I am a sinner, a sinner who seeks God's forgiveness, mercy, and salvation.
The evil one is alive and well in each and everyone, if we allow him to be.  That's where prayer or as St Paul puts it continuous prayer is so necessary to keep us on the course to holiness.
Amen, amen I say to one and all: repent for your sins, pray for forgiveness, and go out into the world and spread the Good News.  Spread acts of kindness without expectations of rewards and your reward will be beyond your wildest dreams and imagination.   Do not gamble with your eternity. 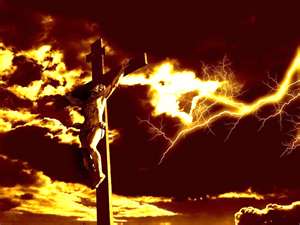 God bless each and every one of you and may God have mercy on your soul, Bill
Posted by buckybob at 1:44 PM