The adventures in Sven

Where do I begin with Sven?  Sven was my third Volvo, an orange 72 142 Coupe.  I was driving a very tired Chevy Vega at some point in my life, and one day I put the clutch pedal in and it broke away from the firewall, and that was the end of the evil Vega.

We already had Olga, our first Volvo as well as the Vega, so when the Vega went south, I started looking for a Volvo.  I saw Sven advertised in the newspaper for $ 500.00, back around 1990.  He was a 1972 142 coupe, two door four speed with electric overdrive, four wheel disk brakes, fuel injected, and in pretty good shape.  There was a catch, however;  Sven clunked when you shifted into the next gear.  The guy I bought it from said he'd driven it a long time with the clunk.  As it turned out, I drove it at least two years with the clunk, before I got it fixed.  The guy came down $ 10.00 on the price, and I paid him $ 490.00. 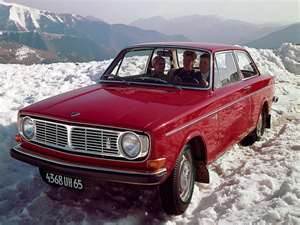 Sven ran great, and I barely did anything to it for a couple of years.  One day, I pulled off from a light, and feeling frisky, put the gas pedal to the floor, and hit second gear, when Sven shook his head, and gasped for air, and we drifted over to the side of the road.  I popped the bonnet, and looked about.  I popped the distributor cap and laughed.  There were points under the cap!  Burned to a crisp points, today.  I ripped some material off a matchbook, and stuck it under the actuator nub on the points to force them to open some.  I turned the key, and Sven started, but had little power.  I limped a little down the road and came to an auto parts store.  There, I got points, condenser, cap, roter, wires, plugs, and hand cleaner.  I limped home, about four miles.  Confident that to my casual observance, a tune up should take care of everything, I went to work.  Things changed quickly when I found all the slop in the distributor shaft.  Time for a beer and make a few calls.  While I was having the beer, I did locate a distributor at a junk yard, the next town over.  I brought my old one to make sure, and sure enough, it was a sure thing.  I went home with my new/old distributor, and went to work.  Things came to a screech when I discovered the hold down screw for the condenser was all buggered up.  I had to cut down a screw to fit and not interfere with the spin of the distributor.  Soon poured and roared into action!


One night, very late and in a winter storm, no less, Sven cut right out and I had to push it to the side of the road with the aid of a passerby er.  Don't ask whey I did not flashlight or gloves, but I did not that night and I trudged through the blowing snow one block to an all night store where I got some cheap gloves and a cheap flashlight.  I had some cardboard in the trunk and spread it out under the rear of the car and crawled under with the flashlight.  The fuel pump was mounted outside the gas tank and I saw two wires going to it.  One wire was broke off the fuel pump.  I got up and from my tool box, got wire strippers and a cotter pin.  Back under, I stripped the broken wire bare at the end, and wrapped it to the eye of the cotter pin, then jammed the point of the cotter pin into the fuel pump connector.  I put the stuff in the trunk, and got in and said a prayer.  I turned the key and heard that familiar whine of the fuel pump, and knew it would start.  I drove home and to work the next day and left Sven at the shop next door for them to fix more "proper"

That's it for now.  Stay tuned for the continuing adventures of Sven, including the drive shaft breaking out of town, and more!