The Composing of Suite in Cm for the Wild Flowers 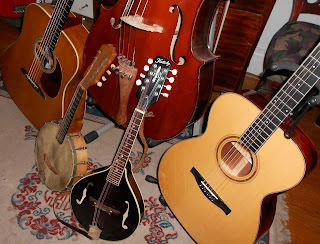 The Story of My Journey of Wild Flowers of the woods to the Journey of Musical Emotions to stimulate the ears and mind. 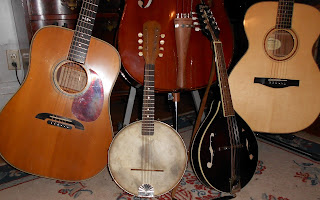 The Journey begins with a friend and wild life lover telling me he is compiling a documentary on woodland wildflowers in our area of upstate NY.  Would I write the music for it?

How could I not want to?

I'm thinken a folky Americana atmosphere.
I've had two turn of the century Banjo Mandolins, hanging on the wall of the studio.  They both play, but the maple shelled one, is sweet!  Because of it's age, when I restored it to playing condition, I kept it tuned down a step to keep the string tension lower.  After all, it's near 100 years old!

A funny little riff came in my head and I auditioned it on the Banjolin.  I said it was sweet but still does not play as nicely as my newer mandolin.  My little riff, or melody is easy enough to sound nice and play without too much difficulty, given a slow tempo.

Well, the way it comes off the Banjolin, places the song in C Minor.  I intended to back the rhythm up with my big dreadnaught Yari.  I tried a capo on the 3rd fret and the song was transposed to A Minor for the part on this instrument.  I thought out of the box, so to speak, and decided to try recording the first track, using the melody instrument, the Banjolin, rather than the rhythm instrument, the Yari.  That's the beauty of re-do's, un-do's, punch in's, and the sort. 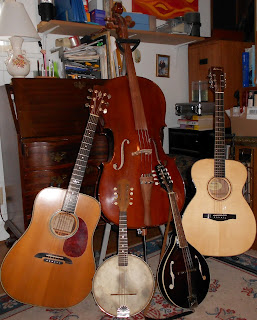 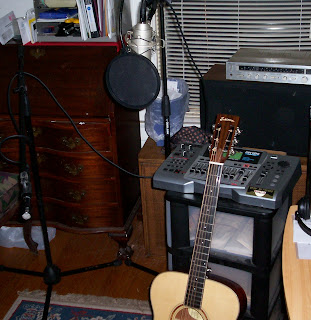 I have a poor man's large diaphragm condenser mic that to me sounds better than anything I've ever had.
Once I had a nice clean track of the Banjolin, I could play around with my guitar part, which, up until now I did not really have any real ideas formulated.  Playing back the track and guitar in hand, I found a solid foundation for the rhythm guitar part, for the most part, but as I kept playing it back, I found transitional chord changes that complimented the melody nicely and enhanced the entire mood and dynamics.


Having said that, I recorded two chorus' of my melody theme; one minute twenty-two seconds.  I figured I'd add my upright bass part, in the Arco fashion, bowed.

Ahh, there's Mrs. Puddy, my resident room mate when I lived in Palmyra!


I had begun the song with a funny little dissident chord strum on the Banlolin, and had ended with it, figuring it would make a nice transition into the 2nd movement.

Listened back to my 1st movement a few times and thought I could double the temp and see what would happen.
This time, I played a track of the rhythm guitar with the Yari, following for the most part, the same basic chord changes as the first movement, but twice as fast. (More or less!)

I think it went down in the first take, a big rarity.  I listened back a few times and though how good it sounded and how quickly it was unfolding, till I picked up the Banjolin and attempted to play along with the guitar track.  That was a joke!  What was I thinking?  I couldn't begin to keep the pace at twice the speed.  Sigh...........
Well, I had two options; try to play the melody on a different instrument or re-record the guitar track at a slower pace.  After contemplating a bit, I decided to attempt it on my Kentucky Mandolin.  It sounds great and plays like a dream. 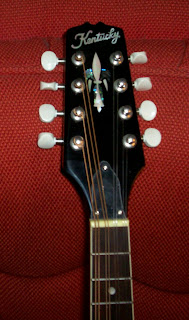 In keeping with the Banjolin, I tuned the Mandolin down a step D, G, C, F.
Well, I still could not keep up the quick pace I had set with the guitar.  Being the stubborn Sicilian I am, I kept trying, and before too long, I was getting pretty close.  I took a break, and went back to it, and managed to get down two chorus's out of the five I had on the guitar track.  The remaining three tracks on the mandolin just were not clean and sweet as the first two chorus's.
I went back to the Yari and tried my hand at flat-picking a melody track.  It too proved to be hard, but like the mandolin, I nawd away at it and came away with two out of three nice chorus's on the Yari. 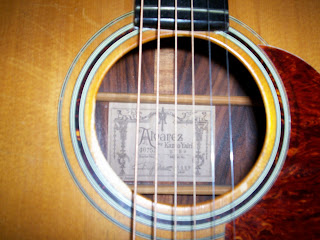 I had one chorus remaing to fill with a melody and I thought I'd gamble on the Mandolin again.  After not too many trys, I got a nice jazzy riff going.  Again, as the 1st movement, I ended the set with my funny chord strum.
That was a nice long two days and I had completed the 1st and 2nd Movement, totalling 2 minutes, 20 seconds.  Only 7 minutes, 40 seconds to go! 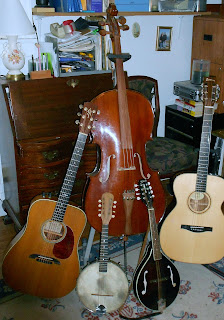 While I was falling asleep that night, I envisioned a low tuned guitar in an open tuning to ring in the next movement.
The next morning, I played around with it and realized that I would have to tune down farther than ever to achieve my C Minor open tuning.  It sounded great, but the strings were too slinky and the tone was flabby sounding.

My friend and I went to a few local music stores in search of Heavy gauge strings but to no avail.  My next option was to find a single bronze string heavier than .056"  Again, no cigar after two stores. My buddy suggested a store on the west side of town and off we went.  We arrived at Stuttsman's Music and they did not carry Heavy bronze strings for acoustic, but did have a set of Resinophonic strings, something heavier than I had found so far.  I asked if they had any single strings that were heavy.  They had an .059"  Perfect!!!
I had decided to put the .056" in the 6th position, and use a set of mediums, which I already had from the 6th string to the 2nd string, leaving the high E 1st string out.
Of course, the nut slots were not set up to get these monster strings in there, so it played like a Mack Truck, if a Mack Truck were a guitar.  But oh, the amazing sound and tone!
Again, I was back in the same hard to play instrument boat as I was with the Banjolin!
I tried to keep my picking clean and crisp as possible and got'r done.
Much of what I played in the open slack C m tuning, was a rhythmic finger picking sustain going.  I decided to add a 2nd track with my open tuning.  That fattened it up nice.  After more playback, I thought I'd go back to the Banjolin for parts of the 3rd movement over the slack tuned guitar.  I played through most of the track with the Banjolin, knowing that I would edit much of it out later. 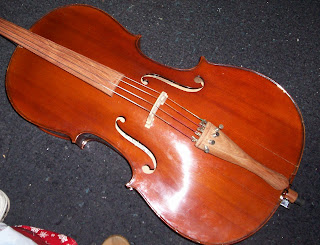 My next quest and big question was: Could I do anything with the Cello that would not sound like a cat being skinned alive?

I goofed with it for a bit with hitting the record button and eventually, thought I had a chance.

I did manage to get some cello in, again, resigning myself to the possibility of cutting most out later.  It didn't come out sounding as if Yo Yo Ma played it, but I didn't cut out as much as I thought I was going to either.
This 3rd Movement brought the time up to just about 5 minutes;  Halfway home!

While scouring my brain for the next emotion and keeping with the familiar theme melody, I thought if I made something out of a low tuned guitar, why not a high tuned one?
I tried the capo on the 8th fret of the Eastman Parlor Guitar and played in E Minor to achieve the proper key of C Minor for this composition.
I was able to come up with great things to add to the frey.  The high pitched guitar was bright and melodic like a Hammer Dulcimer, or even a Harp. 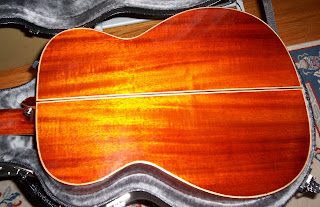 The Eastman ruled the final two minutes of the 4th Movement.

I thought I'd want something low also to hold my high tuned guitar from blowing away with it's light airy voice.

Back to the Cello.  If I keep it low and slow, it just might work. 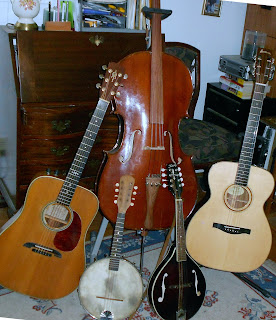