A Year in an MGA

I recken it was round about 1966 that three of us from high school all happened to have MGA roadsters.  Lonnie and I each had 1957 A's and Mark had maybe a 60 or so (Don't quote that year!) with a dual overhead cam engine.  Very cool.
Guess I should drop back and splain what MGA is.  It stands for Morris Garage Automotive, I believe.  They were made in England from 1921 up until 2006 or so, passing through many hands over the years.  To me, the most popular models were produced from the mid 40's to the early 70's. OK, I'm rambling.
The MGA s replaced the earlier TA through TF models with a new more streamlined uni body look.  A British 2 seater roadster (convertible).  They came out in 1955 at the Frankfurt Auto Show and up until 1961.  My 57 sported a 1489CC engine, 4 speed transmission dual SU carbs, and when tuned up, would go like nobody's business.
I found it in an old garage off Hudson St. in Rochester, NY.  I don't recall what the guy was asking for it.  We tried to start it but no go.  He let me hook a rope on and pull it around the neighborhood to try to start it, but nothing.  It was white and fairly rusty.  It was a convertible but the frame and top were gone.  It did have a tonoue cover, which was a little leather cover that snapped over the cockpit area, covering the seats just under the windscreen (windshield).  I just remembered, the starter did not work and that's why he let us pull it around to attempt to start it.  Anyways, we pulled back into his driveway and with the rope still on it, I offered him $ 200.00  He said yes and got the title.  Away we went towing it, my friend, Lonnie behind the wheel of the MG steering and braking and I, towing it with my Dodge 440.  We weaved our way through the city and probably stopped at a gas station to pump air in the tires and get a bit of fresh gas for it.
In those days, Rt 104 was not an expressway, but the Ridge Rd. from Rochester to Webster to Union Hill, Fruitland, and finally to Ontario, NY.  Lonnie was supposed to have the MG in neutral so I could tow it easily, but unbeknown to me, he actually had it in 3rd or 4th gear with the key on in an attempt to start it while we drove.  We had come into Webster and I was slowing down for the light in the middle of town, when I heard a popping and a small explosion.  I looked back through the rear view mirror and Lonnie and the MG had vanished in a thick cloud of black smoke!  The MG started!  I sat there at the green light in a trance and finally the smoke cleared and Lonnie sat there with this big grin, the car, now in neutral.  It was only running on three cylinders but it ran.  I think he let it run at idle the rest of the way home.  We assessed it more thoroughly at home.  The starter did not work, but it had a crank hole in the front and I could turn it over by hand.  In those days the MG's did not have side windows that rolled up and down, but plexiglases screens that fit into the top of the doors.  They were clear at some point in time, but now they were hazed over and you could barely see out them.  The car also did not have outside door handles; you had to reach inside the door to open it.  Overall, it was in pretty bad shape but I was as delighted as one who was given an new Rolls Royce.  After all, we were only about 17 years old at the time.  After getting it registered and plates on it, I took it to a friend's home nearby and he determined that it had a cracked head so one of the cylinders would not fire.  The local junkyard had a used head off a Nash Rambler that used the same engine and for $ 30.00 I grabbed it.  I somehow don't think we even put a new head gasket on, but with the Nash head, it fired up on all 4 cylinders.  At Xerox, where I worked, there was a guy from England who offered to take it home over the weekend and tune it up for me.  When he finished, it was ready to burn up the road and I did my best to do just that.
About the same time, Lonnie found another 57, just like mine.  One day we were tooling about town, when we ran into another mate from school, Mark.  He was driving a 1960 MGA with the dual overhead cam engine.  In a small town like Ontario, NY, we were the three amigos in our MGA's.
The cars had an entire new language to grasp describing the parts of the car.  The hood, of engine cover was the bonnet.  The generator was the dynamo.  the windshield was the windscreen. 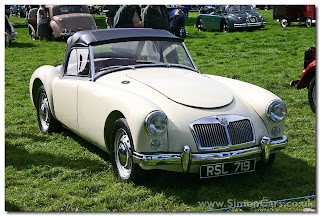 We three, drove those MGA's for about a year before having to grow up and go in the service.  Lonnie left in January 1968 for the Navy and stored his A in his family's barn.  I went over one day and "borrowed" the car top, frame and all.  Before that, I only had the tonoue cover and it was a brutal winter in upstate New York.  I followed Lonnie into Navy boot camp in April of 68 and foolishly stored my A at my parents one car garage.  How stupid was that?  A few weeks later, I got a check in the mail from Dad for $ 150.00 with a letter boasting about how he sold it for such a great price!  If only he knew how much I had in the car!  Sigh...........
Posted by buckybob at 8:05 PM

What a magical time that was Buck. I got my MGA from the oldest son of the guy who owned "Ontario Gas and Oil" I traded my Morris mini Cooper for it and my dad was really pissed at me. I loved that old MGA and you also having one made it that much more desirable. That was the year we got arrested for mooning the Justice of the Peace's wife and kids. Oh the 60's...what a great time to live.

Good memory Buck, for the record mine was a 1960. What a great year.