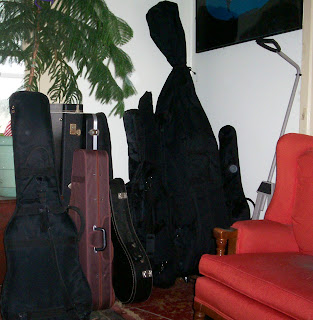 Here we are; another New Years Eve. Just trying to remember some of the celebrations I've played in bands over the years. The specific years are all fuzzy, but I remember a couple (at least) with the Back 40 Band at the Geneva Moose Club. It started with a climb up narrow stairs with the equipment, through the kitchen, to get to the main room and set up. Then there was the let down of the party woodchucks coming in to celebrate. The band sounded good, but the spirit was hard to conjure up in a room of strangers, smoke, laughter, and tipsy folk on the dance floor, doing their best to knock my teeth out, bumping into the mic stand! In the 80's, the pay scale, even at the Geneva Moose was probably better than today's pay on New Years.

I seem to remember a couple New Years Eve parties at the Ontario Fire Hall, playing with the Shortbread band. I probably did know more folk at those occasions, as I grew up in Ontario. Still, it was not the most exciting place to be on New Years Eve. I remember one time there, my wife and the bass player's wife took off bar hopping while we were playing and didn't come back till way after the ball dropped. Lord knows where they went, but my wife was not able to stand on here own two feet, and I found her outside, fertilizing a snow bank with tequila, vodka, and Cognac. That was a memorable occasion for sure.

The most profitable New Years Eve I ever played was the California Brew Haus, solo, six sets, from 9 to 3:30 AM. Dickie, the proprietor, got a special permit to stay open till 3:30! It was quite a night. By midnight, I lost my voice, ran out of material, and reverted to songs I've never performed, like Doo Wah Diddy. I only knew one verse and repeated it, stretching out the song for the dancers. The funny thing I remember was people requesting the stupid song again! By 2:00 AM, I managed to retrieve my voice, continued singing, playing, and amusing myself with the antics of the crowd. One drunk gal got up and sang with me, her breath, stinking of booze, me, bobbing and weaving, in a feeble attempt to escape her breath. I was smart and did not drink any booze. Good thing, too, for I passed through two road blocks on my way home.
Posted by buckybob at 10:38 AM