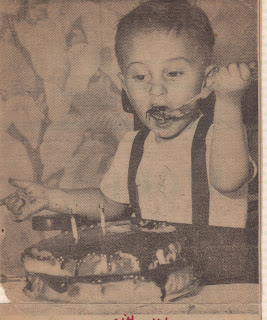 Former ‘Blue Baby’ Enters 3rd Year in Perfect Health Just found this old newspaper article from my 2nd birthday. I was one of the first (if not the first) to get a complete blood transfusion at birth and live to sing “Good Night Irene” The print’s a bit small so here’s what the article said: Early Bird Getting a head start on his birthday cake is Francis R. Gelo who is two years old today. At birth, Bucky was a “blue baby” but today he’s normal enough to tackle the two-layer delight before him and sing “Good Night Irene” for his relatives. Former Blue Baby enters 3rd year in perfect health. Little Francis Rober Gelo sat on the sofa in his parent’s home at 365 Rosewood Ter. Yesterday and sang “Good Night Irene” He was tuning up for his second birthday party today. His parents Mr. &  Mrs. James Gelo, proudly watched and listened to his singing. “You can see he’s just as normal as any baby now,” his mother remarked. And she was right, Bucky, boy’s nickname, who is 2 years old today, is perfectly normal-so normal in fact that he blossomed out with the measles last week. But, he’s over them now. But when Bucky was born two years ago, Bucky wasn’t normal. He was a “blue baby,” but thanks to medical science, he’s alive and well today. Immediately after his birth, doctors drained the deadly R-H positive blood from tiny body and substituted R-H negative blood. Today Bucky will be the center of attraction at his birthday party, which all his relatives will attend. “He will probably be singing “Good Night Irene,”’ his mother said until we have to put him to bed.”